Nature is having a moment.

Record numbers of people are visiting parks and conservation areas, overwhelming parking lots, crowding trails, and straining resources. The threats to parks and to public health have forced parks to close, just when they’ve never been more important to people who need the restorative and calming power of nature. Those who can are discovering nature close at home, with huge increases in people contributing to iNaturalist and other citizen science projects. Those who can’t are raising their voices to call for more and better outside spaces and access to those spaces for all.

The need to be outside, in wild spaces, is eternal. But the prominence of nature and outdoor recreation in American public discussion and policy has varied. The twentieth century had some high points—the founding of Earth Day 50 years ago and passage of the Wilderness Act in 1964—but not since the nineteenth century has Nature been so popular.

At noon on Saturday, May 24, 1890, more than one hundred people, concerned about the destruction of nature, gathered at MIT on Boylston Street in Boston. A young man named Charles Eliot went to the podium and began his speech. “There is no need of argument to prove that opportunities for beholding the beauty of nature are of great importance to the health and happiness of crowded populations…” 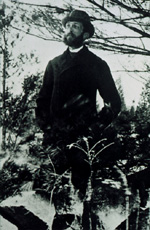 Eliot was thirty years old and working as a landscape architect in Boston when he argued for more nature close to the city. Writing in Garden & Forest magazine, he acknowledged the value of any type of urban green space. But, he wrote, “a crowded population thirsts, occasionally at least, for the sight of something very different from the public garden, square or ball-field.” They needed something wilder, less groomed, full of trees and rushing streams, green space of a different quality. While thousands of people rode trains and street cars “every pleasant Sunday through the suburbs to the real country,” such a long journey “to real country” should not be necessary, he thought.

Eliot knew that places of “uncommon beauty and more than usual refreshing power” still existed within ten miles of the State House. He also knew that such places were fast disappearing, as he witnessed destruction of the nature he had explored in his youth, growing up in Cambridge as the son of the president of Harvard University (and later as Captain of the Champlain Society). Preserving the “finest bits of natural scenery” and “needed oases of light and air” would become his life’s work.

Under the auspices of the Appalachian Mountain Club, Eliot organized a movement “to rescue from danger many scenes of natural beauty and hold them for the enjoyment of coming generations.” Their effort was not unlike the movement for national parks in the West, and some of the same people were involved in both, but the focus on nearby nature and public access to that nature differentiated Eliot’s ideas.

A subcommittee led by Eliot and his mentor, Frederick Law Olmsted, quickly worked up a proposal for the organization that would become The Trustees of Reservations, the world’s first land trust. Over the next seven years, through The Trustees and his later work with the Metropolitan Parks Commission, Charles Eliot was able to help conserve many of the properties he worried would be lost, including Waverly Oaks, Hemlock Gorge, and Blue Hills.

Sadly, it would be up to others to continue the work when Eliot died suddenly in 1897, on the eve of another spring, his favorite season.

Today, Charles Eliot’s legacy includes creation of Acadia National Park in Maine and the National Trust in Britain. Everyone who visits a land trust property, enjoys a park in the Boston metropolitan area, and hikes in Acadia is a beneficiary of his idealism.

Charles Eliot believed that the more people everywhere appreciated “the soothing and uplifting value of beauty and grandeur in natural scenery,” the more land would be secured for city parks as well as funding for their planning and maintenance, and more towns would save their “tree-shaded and fern-embroidered glens” and treat them with skill and reverence. Charles Eliot wanted to create opportunities for other people to be immersed in nature, to know and feel the solace and joy he knew and felt when surrounded by real country.

Now—when the critical importance of parks and conservation areas is so evident—is the time to fulfill Eliot’s vision for “a public conscience to protest against the obliteration of natural beauty wherever found.”

Now is the time to protect and restore remaining wild areas, create new common green spaces, and connect them with rejuvenated public parkways.

This spring, more than ever, everyone deserves the opportunity to find delight in the blooming and blossoming of nearby nature.